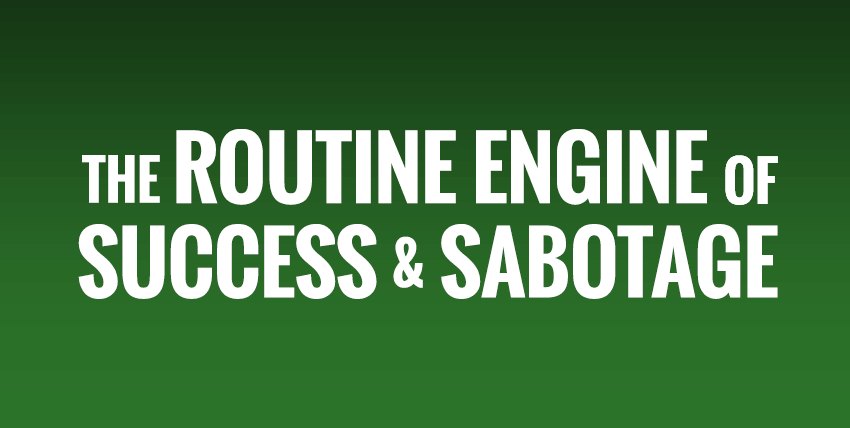 THE ROUTINE ENGINE OF SUCCESS AND SABOTAGE

At the core of our being is the routine of worthiness.

You were programmed. You live out your programs until something dramatic happens to interrupt your routines. It’s not your fault; the adults charged with your care may have had the best of intentions; however, they didn’t know the impact of their actions. Every word, event, social engagement, celebration, death, harm, and denial went into the programming of your mind and defined your core of self-worth.

The bug in your brain habitually enforces the collective thoughts someone else gave you. As a child, you could not determine what was true and what was false. You developed that skill later when you learned there was a difference. You didn’t pick your own name, let alone have the choice of what is good, bad, moral, right, wrong, safe, or dangerous. You inherited programming that does not serve you now; it stands in the way of your progress and the attainment of your dreams.

Within the center of your brain is an oval cluster of neuron cells called the basil ganglia. In his excellent book, The Power of Habit: Why We Do What We Do in Life and Business, Charles Duhigg details the groundbreaking research performed in the 1990s by the Brain and Cognitive Science department at MIT. They discovered that routines are learned, stored, and, in part, executed by the basil ganglia. More recent research points to other cooperative segments of the brain that assist in language, emotions, physical ability, and a host of other functions we often take for granted.

Your brain handles much more than you comprehend. Recent discoveries have determined that you developed 85 percent of your brain’s neuron cells by the age of two. Unlike all the other cells in your body, replaced at regular intervals, the bulk of your neuron cells stay with you from birth and return to the earth at death. It’s as if you’re given a computer at birth with a set of primary programs and the ability to download new ones.

The Routine Engine can learn, store, and perform language, emotion, and image routines. For example, consider a song that gets stuck in your head. You seem powerless to stop the runaway thinking and constant force of the music. Your Routine Engine is in an infinite loop, and unless you’re able to interrupt it, the song is drummed out habitually.

Imagine a song stuck in your head repeating, “I suck, I am not smart, I am a loser, I wish I could do better, I will never have enough money.” That would be terrible, wouldn’t it? However, that’s precisely the painful reality. It all adds up to wasted energy in your attempt to overcome anxiety, fear, and a host of other character problems keeping you from your success. You are in a constant battle of wills and your Routine Engine is winning!

There is good news. Through the power of habit, you can reprogram your Routine Engine and replace your limiting bugs with new, more up-to-date software in line with your goals. The language, emotions, and images of higher self-worth must be reprogrammed in your Routine Engine. Worthiness can be lifted and by lifting it, you can achieve the goals you set.

If you’re not satisfied with your life, then know there is a way to fix the bugs in your brain and get what you want. By changing the language in the Routine Engine to higher self-worth, you naturally direct your thinking to focus on success and the action to attain it.

Robert Christiansen is the bestselling author of “The Bug In Our Brain” – How Lifting Self-Worth Clears the Path to Success.

Robert is an executive, entrepreneur, mentor, public speaker, master coach and is the president of Motive For Life, a professional coaching, event, and publishing company based in Lake Forest, California. Robert’s thirty years of work in the field of alcohol and drug addiction led him to his discovery of the relationship between self-worth and sabotage behaviors that affect millions of people around the world. Motive For Life is dedicated to bringing this solution to the general public and elevating the collective worthiness of the human population. 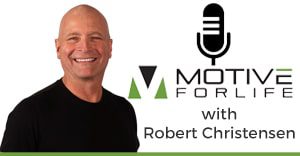 Get our weekly podcasts in one convenient email every Sunday morning. Super easy and fun!

The Side Hustle and COVID-19

How to Observe and Control Your Thoughts

Five Powerful Ways To Raise Your Worth

Potential Is Not Enough

Best Books of 2017 To Lift Confidence

The Power of Being Present